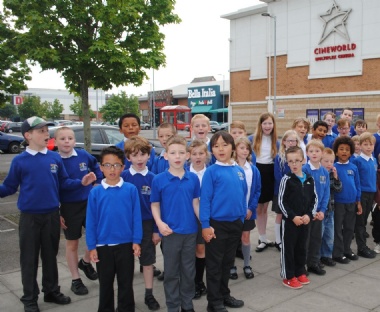 42 children from Towerview Primary School went to the cinema in Burton to see "Spark" an animated adventure film.  This was their reward for attending every day during 2016-17.

Speaking to some of the children a Year 6 pupils sated "Yes it was a great film, I really enjoyed it!"; whilst a year 3 said "I'd never heard of the film, but it was really good."  Some of the children have now attended the last 5 reward trips to the cinema and are hoping to make it six next year.  Attendance is important and children who do attend more usually do better.  Mrs Day, Deputy Head Teacher said "The children loved the film, their box of goodies and being out of school!"  This is a free trip for all and it is something that is becoming more popular.