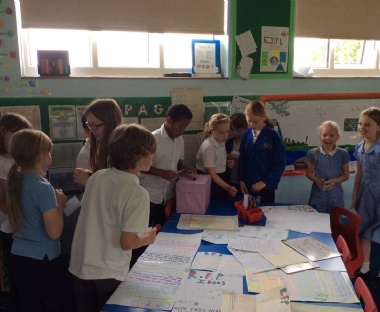 On Wednesday 17th June, year 5 held their own election.  This involved the pupils forming their own party, electing their party leader and writing a 5 priority election manifesto.  Once this had been completed the children then presented their ideas to the rest of the year group and had a short question-answer session.  There was then a voting process and the votes were counted over night with the party with the most votes being announce the next day.

First 21% of the vote: SHAPAL party

The children learned about democracy, fairness, teamwork and the importance of being clear on their ideas.  One child said "I think the elction was fair, but some of the questions asked were difficult to answer!"

A display of the manifesto ideas, pictures of democracy in action and voting slips can be seen in the main foyer at school.