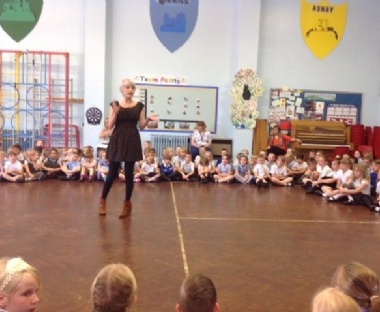 The school held its second Poetry appreciation assembly whereby children of all ages perform a class poem.  This term we were very fortunate to have Emily Galvin (Staffordshire Poet Laureate) visit and join in the assembly.

The poems read and performed by the children included: Benjamin Bandicoot, Windrush child, Song of the Animal World, Koala Rescue,The Jungle Song and A Child's World.  Each class gave an excellent performance and the audience listened intently to the poems.  There were poems that were sung, chanted, accompanied by drums and spoken deliberately and confidently.  Everyone enjoyed the performances and Emily said "It was so good to see and hear children reciting poems so well and enjoying poetry."  She went on to add "Some of the poems made me laugh, think, smile and feel sad; but above all they made me feel proud of you all!".

At our last assembly 2JD performed their poem and were chosen as Mr Ridout's favourite so receiving the trophy; however Emily chose today's favourite and she chose class 5JC with their performance of Windrush Child, a poem about the immigrants into England in the 1960's.  Well done to everyone and especially 5JC.  A special mention to David for his poem that was read to everyone about the effects of a world on woods, the earth and animals.